Figure 1A: The Al-Muzaffar Central Masjid. This institution represents 900 years and more of learning and teaching. It has many names and appellations.

This institution represents 900 years and more of learning and teaching. It has many names and appellations. Imam Ibn Al-Mabrid (d. 900 AH) said that this complex has four main names:

1) The Central Masjid of Al-Muzaffar. This name was given on account of the Sultan, Muzaffar ud-Din Kawkaburi – the governor of Irbil and husband of the sister of the venerable hero and legend, Salah ud-Din Al-Ayyubi – who completed the building of the structure. This is one of the most well known names that was used by historians.

2) The Central Masjid of the Mountain as it is not far from the great mountain Qasiyun.

3) The Central Hanbali Masjid. This title was given as it was an endowment set by a Hanbali marja`.

4) The Central Masjid of the Pious Ones.

Figure 2A: The courtyard of the Central Masjid along with the Arabic columns, western facing gate and fountain.

Ibn Kannan said of these two structures, “They are set apart by making mention of what is in them of blessings for every one. This is due to the fact that much of what happens in them is the preoccupation with lectures and places of memorisers of texts and hadith sciences. The gatherings in these places is not like the gatherings of other places.”

Figure 1B: An inside view of the complex that shows its’ exalted beginning and the care of its’ builders.

The Building of the Central Masjid

Historical documents indicate and all point to that the laying of the foundation of the Al-Muzaffar Central Masjid was begun by the Imam Abu `Umar Muhammad ibn Ahmad ibn Qudamah Al-Maqdisi. He had emigrated with his family to the area from Palestine in the year 550 AH (AD 1155).

He was settled in the Salihiyyah neighbourhood area of Damascus and started the project of building the Central Masjid in the year 598 AH (AD 1202) after first building the hostel for the Hanbali scholars and making it an open place with a courtyard in order for people to gather.

A man by the name of Abu Dawud Al-Fami, who was a merchant, donated some money towards building the structure and expended his wealth in the process. When this happened, the building came to a halt and it did not go forward and this news reached the king, Al-Muzaffar Kawkaburi who was in Irbil.

Upon hearing of the situation, Al-Muzaffar sent 3,000 dinar to them in order for the completion of the project just the same way as money was put forward by Imam Abu `Umar Al-Maqdisi to excavate a well and the building was declared an endowment.

The building projected was completed on 17 Rajab 610 AH. It was mentioned that the one given the post of maintaining the Al-Muzaffar Central Masjid and starting classes and projects was the Shaikh, Ahmad ibn Yunus ibn Hasan Al-Maqdisi Al-Mardawi (d. 622 AH). This was another Imam who had emigrated to the area from Jerusalem in Palestine. 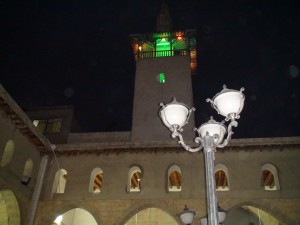 Figure 2B: A view of the grounds of the Al-Muzaffar. One can already see the greatness of the structure even through the pictures.

A Description of the Central Masjid and its’ Grounds

At first glance, the grounds of the Central Masjid, in terms of its’ measurements, appearance and general layout was originally intended to be similar to those of the Umayyah Family Central Masjid. The Al-Muzaffar Central Masjid has an Arabic overhanging arch that has within it the Great Western Gate that opens onto the enclosed courtyard which has in its’ centre an enclosed water fountain. 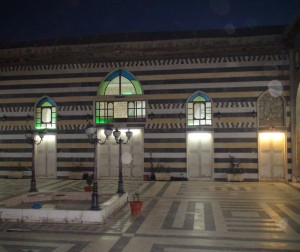 Figure 3B: Another picture of the outside grounds of the Al-Muzaffar complex.

The Masjid area also has another western facing gate. Now just as the south wall of the Central Masjid has a mihrab mounted as part of the new construction, there are also whicte pillars that are decked out and go to the right of the mihrab and there is the mimbar made of wood. This is a great sign of construction and building and was a gift from the king Kawkaburi. This area was beautified with places of trees and vegetation and engineering that is numbered among the wonders of Islamic engineering sciences.

The history books point to the issue that the mimbar of the masjid in the beginning of its’ building resembled exactly that of the mimbar in the Masjid of the Prophet, peace and blessings of Allah be upon him, in Al-Madinah. This mimbar had three steps up until the construction was complete in the year 604 AH. 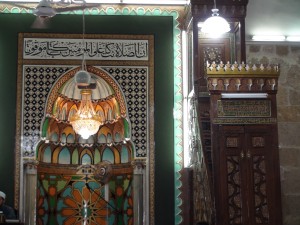 1C: This is the inside of the Al-Muzaffar complex. On the left, one can see the ornamented mihrab indicated the direction of prayer. On the right is the mimbar, patterned after the mimbar in Al-Madinah.

In summary, the Central Masjid is one of the wonders of Damascus in terms of its’ layout, unique embellishments and the structure was also renovated in the 1970s of the Gregorian calendar. One can see in it moderns works of engineering but they always make it a point to preserve the original measurements and older structure and keep with the vast majority of the external structure and form.

2C: the walls of the Al-Muzaffar near the prayer area. The workmanship is clearly amazing.

A Historical Account of the Central Masjid and the Knowledge Disseminated

A historical account of the knowledge disseminated in the Al-Muzaffar Central Masjid brought about a general knowledge renaissance spearheaded by those who had emigrated from Jerusalem in Palestine to the Salihiyyah neighbourhood and when they made their children hear the knowledge from their youth.

These children also used to head out to speak with and learn from the senior scholars from the habitations of Damascus and made their way there and met up in the Al-Muzaffar which had a large group of scholars there teaching lessons. It is not possible to list all of their names in this place, so the most well known of those who lived in the Salihiyyah area, heard knowledge, made other people hear by teaching and dictation include the following:

3C: An old photo of the inside of the Al-Muzaffar

Congregational gatherings for listening to the knowledge was widespread in the Al-Muzaffar Central Masjid and an abundant number of shaikhs shared the area and it maybe that some of them also shared the area with the female shaikhs in one gathering so that they could hear some of the books of hadith and this way was unique and a symbol of excellence that the scholars of the Salihiyyah possessed.

The Central Masjid was a bright star in the constellation of scholars and memorisers that spread knowledge far and wide in the world and they heard the hadith collections therein and some of the most popular students who attended were:

1. Ahmad ibn `Abdul Halim ibn `Abdus-Salam Ibn Taymiyyah Al-Harrani (d. 728 AH). This same scholar had learned in the Sakriyyah and Hanbaliyyah schools and heard from his shaikh, the Imam `Abdur-Rahim ibn `Abdul Malik Al-Maqdisi, Isma`il ibn Abi `Abdullah Al-`Asqalani in the year 675 AH. There is a text of dictation and reading by gathering that was found in his handwriting recently.

2. Isma`il ibn `Umar Ibn Kathir Ad-Dimashqi (d. 774 AH). He was the Imam, the Mufti, the well grounded scholar of hadith and author of Al-Bidayah wan-Nihayah history text. He heard Ahadith by dictation and reading from Abul Hussain ibn Al-Muzaffar with his shaikh Ahmad ibn Al-Muhibb in the year 730 AH while in attendance at the Central Masjid.

He was resident in the Salihiyyah neighbourhood for 100 days and he heard 100 parts of the major books of hadith. He was present in a gathering in which the teacher was the Imam, Ibrahim ibn Muflih Al-Hanbali in the Al-Muzaffar Central Masjid.

Figure 4C: A close up of the prayer area of the Al-Muzaffar.

It is has become clear to us according to that which followed previously the exalted standard which this Central Masjid belongs to and the role it played in the religious renaissance in the land of Sham when the senior scholars came together and exerted their brilliance. This was taken from the website of the maraji` and translated with only slight modifications.

It is my intent to make this part of a much larger post in the future about intellectual history and how the preservation of institutions protects one from colonisation. If someone controls your learning, they control you without firing a cannon ball, rifle or wielding a knife. It is my hopeful intention to put forward this example for the readers.