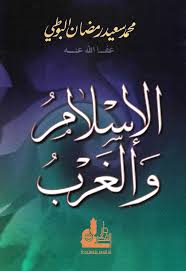 The content of this book I had felt and known in the 1980s-1990s, but at the time I did not have the Revealed Law knowledge of the affair to know the proofs. This book represents the confirmation of my understanding but also the proofs in the Revealed Law and moderated discussion with the epistemological foundations of the Occident.

American Islam (which is the harlot that produced British Islam) is intellectually covered although not named; along with this goes the doctrines of moral relativism, a parsing of the principles of dialectical materialism and how this leads to evolutionary thought and even a strong treatment of the doctrines of religious indifferentism.

There are good reasons why Imam Muhammad Sa`id Ramadan Al-Bouti’s work here and his texts on the Fiqh of Minorities have not been given wide circulation in the Anglosphere. The primary reason is that this and his other texts would undermine the system that is currently being built for the new islams in our midst.

The secondary of the most important two reasons is that as the disparate left wing Muslim groups in the Anglosphere unite and carry out more acts of terror here, there are many agencies that stand to benefit from this and will have justification for tightening laws that restrict movement and civil liberties. The future may start to become a darker place than it already is currently.

I thank Allah for having had the opportunity to read the book, the brother that gave it to me and hope that some blessings might be reached by everyone who might read its’ pages.