Figure 1A: Chaos on the West Coast as people scramble for cover from a shooter.

The following article below gives an update on the shooting (considered the worse mass shooting in US history in recent memory) and also provides visual and audio of the incident. I have to say that when I first watched and listened, I had a flashback of when I lived on the West Coast. The clap of the weapons, the thumping of the rounds brought me back to the 80s and on at the height of West Coast violence.

I looked at the people and noticed them not moving and wondered, “Why aren’t they moving?” Then I remembered that these are concert goers, people that did not bury their friends at 16, go to funerals weekly and witness police shooting twelve year olds in the back walking home from school. Then there were the gangs. The AK-47s shot into the night air on Florence and Normandy with men walking around like desperadoes 200 in number on the Monday night.

Ten people killed in your neighbourhood on a Monday and ten over the weekend. I have to remember these are concert goers. News still rolls in but now their lives have changed. They will have the nightmares that I have, the flashbacks I still have…this is no joke. I hope that the missing can be found, dead or alive. This will at least give closure to the families of the deceased/injured.

I hope that those injured are able to obtain the proper medical attention for their infirmities. Military grade weapons blow off limbs, maim people and those standing next to the weapon sometimes have their clothes singed. The world for them has changed. Now more than ever, Americans are witness to and will be made to live the life that the underbelly has lived.

The coverage will change people’s perception of “poor neighbourhoods” forever and make people ask telling questions. When you are not safe at the movies, concerts, shows, 7-11s, AM/PM stores, local parks (that are often part of the local gang’s name), this is a hint of life on the West Coast. The gang capital of the world is only 20-30min from Disney and amusement parts. That world is only moments away but for people such as those killed/injured tonight, it might as well be a galaxy away.

Maybe this will open new questions- not about gun control– but about a broken society, a two tier America where people have shell shock and they’re nine years old. Before this is said and done, Americans should be asking not about gun control but about their society. Why are people like this made (they are not born)? Why does this keep happening? What are the long term consequences of continual shootings like this?

Please see the article below. I have only changed the video at the beginning as BBC had better video footage and also the twitter stuff that keeps giving macro/micro errors so I did not keep them. The original article is linked with all original details.

– More than 50 people dead after shooter opens fire in Las Vegas
– Officially the deadliest mass shooting in US history
– More than 200 people are injured
– Witnesses say hundreds of shots fired into the crowd
– Two off-duty police officers among the dead
– Gunman shot dead by police named as Stephen Paddock, 64
– 40,000 were at a concert near the Mandalay Bay Hotel when shooting started
– Only one suspected shooter who acted alone, say police
– Donald Trump tweets ‘warmest condolences’ to victims’ families
– Hundreds fled the scene while shots were fired

More than 50 people have been killed and at least 200 injured after a shooting at a music festival on the Las Vegas Strip.

A gunman in a hotel room fired hundreds of shots into a crowd of music-goers at the Route 91 Harvest Festival, in what is now the deadliest mass shooting in US history.

The gunman, who was shot dead by police, was named as Stephen Paddock, a 64-year-old from Mesquite, Nevada, who had no criminal record or known terrorist connections.

Witnesses said there were about four or five minutes of gunshots.

Police had launched a search for the shooter’s female travelling companion, Marilou Danley, 62, who was named as a ‘person of interest’, but she has since been found.

Police found a number of rifles in Paddock’s hotel room.

The shooting surpasses the death toll from the killings of 49 people at the Pulse nightclub in Orlando in June 2016. 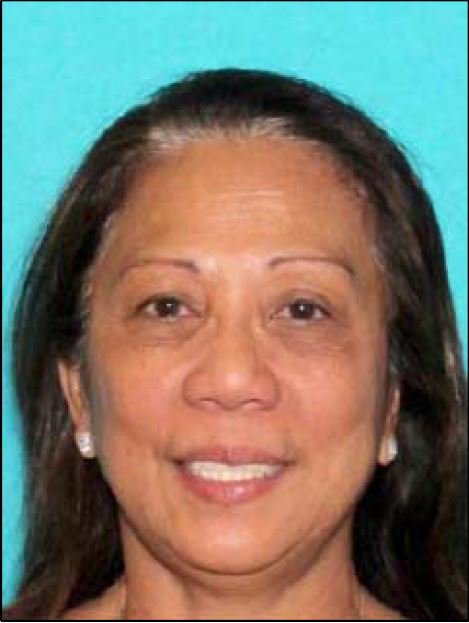 Marilou Danley is being sought for questioning re the investigation into the active shooter incident. If seen please call 9-1-1!

Paddock opened fire on the crowd of concert-goers from the 32nd floor of the Mandalay Bay Hotel.

Some officers took cover behind their vehicles while others carrying assault rifles ran into the Mandalay Bay Hotel and Casino.

Officers shot and killed the shooter, Mr Lombardo said. He said police used a controlled explosion to get to the shooter through the door of his hotel room.

One officer who was on duty in in a critical condition and another was wounded.

Las Vegas Police said they did not believe there were any more shooters. Mr Lombardo described the shooting as a ‘lone wolf’ style attack.

It is thought there were up to 40,000 people in the crowd at the concert when the shooting started.

At this time there is in excess of 50 deceased and over 200 injured individuals.

Videos posted online showed people diving for cover as shots from what appeared to be an automatic weapon could be heard.

In videos of the incident posted on social media, prolonged gunfire could be heard.

Police have also located two vehicles they believe are associated with the shooter.

US president Donald Trump tweeted: ‘My warmest condolences and sympathies to the victims and families of the terrible Las Vegas shooting.’

British holidaymaker Mike Thompson, from London, told the BBC: ‘We were walking back to our hotel, the MGM, after dinner and we saw people running towards us in total panic.

‘One man had blood all over him and that’s when I knew something was seriously wrong.

‘I could hear automatic gunfire so I grabbed my partner and we ran to the back streets. People were running and there was chaos.’

Jake Friedman, who was at the concert, told Sky News: ‘You could clearly see dozens of bodies piled up on the ground.

‘Then we realised people were getting massacred in front of us.’

A witness told News3LV that ‘bullets were flying everywhere’ as concertgoers fled.

‘It sounded like some fireworks going off,’ a witness told NBC Las Vegas. ‘And then I think there was like the first kind of volley, then the second volley. Lots of people got hit.’

Hundreds of people fled the scene of the concert as the shots rang out at about 10.30pm.

Of those, at least two had died and 12 were in a critical condition. The rest are being assessed.

Authorities shut down part of the Las Vegas Strip and Interstate 15.

Some flights destined for McCarran International Airport were diverted due to the incident.

Witnesses said country singer Jason Aldean was playing near the end of the concert when gunfire rang out.

Concert-goers reported seeing muzzle flashes from the upper floors of the Mandalay Bay Hotel and Casino across Las Vegas Boulevard from the country music festival and the sound of what they described as automatic gunfire.

Witnesses said they saw multiple victims as they fled the shots raining down on the concert venue.

Some later huddled in the basement of the nearby Tropicana hotel-casino.

A concert-goer said he heard what sounded like fireworks while he was watching Aldean’s performance.

Kodiak Yazzi said the music stopped temporarily and then started up again before another round of pops sent the performers ducking for cover and fleeing the stage.

As the 40,000 fans in the crowd began to flee, the 36-year-old took cover and said he saw flashes of light coming from the Mandalay Bay hotel tower high above.

The bursts of pops would start and stop for more than five minutes.

He said he saw dozens of ambulances as he ran for safety. He later got a Lyft driver to take him home to suburban Henderson.

Country singer Jason Aldean, who was performing on stage when the shooting started, posted a message on his Instagram page.

He wrote: ‘Tonight has been beyond horrific. I still don’t know what to say but wanted to let everyone know that me and my crew are safe.

‘My thoughts and prayers go out to everyone involved tonight. It hurts my heart that this would happen to anyone who was just coming out to enjoy what should have been a fun night.’

In a tweet, staff at the Mandalay Bay Hotel paid tribute to the victims of the shooting. 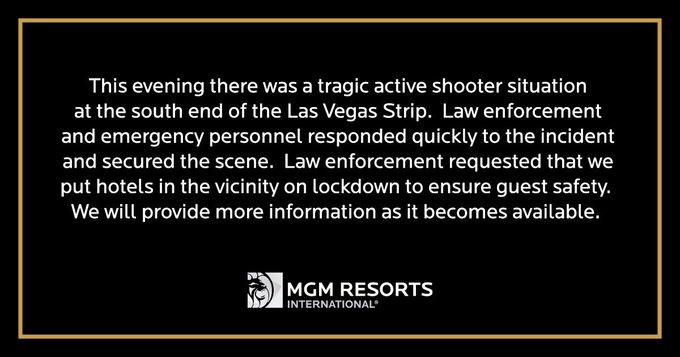 British prime minister Theresa May wrote on Twitter: ‘The UK’s thoughts are with the victims and the emergency services responding to the appalling attack in Las Vegas.’

The Foreign Office in the UK said it was in contact with authorities in Las Vegas and that it was ‘ready to help’ any British people affected.

A spokeswoman said: ‘Our sympathies are with all those affected by the horrific shooting in Las Vegas.

‘Details about the incident are still emerging and we are in contact with Las Vegas emergency services. We are ready to help any British people affected.

‘Any British people in Las Vegas should follow the advice of emergency services, and check the Foreign Office travel advice.’