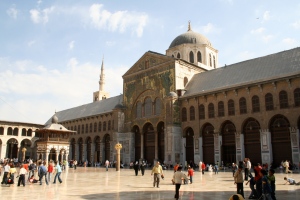 Imam Ibn Rajab Al-Hanbali (d. 795 AH), may Allah be pleased with him, declared about the first month, Muharram:

This state of envy that Iblis was showing towards Adam remained until the means to expel him from the Paradise came. So this fool did not count on the fact that when Adam was expelled from the Paradise that his virtues were actually completed and then he shall return to the Paradise in an even more perfect state than the first time!

Indeed, the conceitedness of Iblis is what he destroyed himself with and it is due to that he said, “I am better than him!” The completion of the virtues of Adam was only done upon his admission of his slip.

Our Lord! We have oppressed ourselves and if You do not forgive us, have mercy upon us then we shall surely be lost. [1]

When Iblis had the fire of envy kindled towards Adam and he blew on it, the breeze from it in the end was just a good smelling scent to Adam while Iblis himself was the one who was singed!

When Allah so desired to spread the virtue and bounty of Adam,

It came through the means of the tongue of the envier in chief, Shaitan!

If the fire of envy had not been kindled by that wretched one towards his object of envy,

The beauty and elegance of the scent from the virtue of Adam could not have been seen!

One of the early generations said, “Adam was expelled from the Paradise on account of one slip. And you have several of these, you increase in them and at the same time you have the audacity to desire to enter Paradise!”

Sins reach other sins and yet you hope and have desire,

For the levels of Paradise, the success of the slave where you shall retire!

You forget that Allah expelled Adam and his wife from that very felicity,

To the earthly life on account of one slip that was done against his ability!

Beware of this enemy, Iblis! He is the enemy that caused the expulsion of your father from the Paradise. He strives studiously in preventing you from returning to the Paradise with every scheme and way. The enmity between all of you people and him is longstanding.

His expulsion from the Paradise and his falling from the divine service happened for no other reason but his arrogance against your father and refusing to prostrate to him as he was commanded to do.

He then became deceived and removed from the mercy and has lost hope of ever returning to the Paradise and has instead to look forward to his permanent home in the Fire. So based upon this he strives on taking with him to the Fire who he can from the Children of Adam by beautification of idolatry.

And if Iblis cannot entice the human being to do that, then he strives to bring the one from Adam into rebellious sin and disobedience. Your Lord has warned you about Iblis and He gave him an excuse and respite for some time. Take heed of him when you read:

Children of Adam! Do not let the Shaitan put you to trial just as he expelled your parents from the Paradise. [2]

It is astonishing that someone would know his Lord and then disobey him, know the Shaitan and then obey him.

So have you taken him and his progeny as protectors besides Me while they are to you a clear enemy. And a terrible tribulation awaits the oppressors.[3]

When Adam came down to Earth he was promised that he would return to the Paradise and so would anyone who believed from his progeny and followed the messengers.

Children of Adam! When there should come to you messengers to you narrating My Signs to you, whoever has piety and rectifies himself, then there is no fear upon them nor shall they grieve. [4]

So let the believers heed the good news of the Paradise as it is their end result. And the coming of that gathering day shall be with Jibril to Muhammad, peace and blessings of Allah be upon him,

And give glad tidings to those who believe and do righteous deeds that they shall have gardens under which rivers flow. [5]

The penalty to come is only for the one who left from obedience. In terms of the one who repented and believed, then the end abode of punishment is not for him. The believers in the earthly life are on a journey of combat against themselves and lower desires.

So when the journey of combat finishes, they shall return to their original home which they were present in while in the very spine of Adam!

Allah has taken responsibility for the one making combat in His Cause in that He shall return such a warrior to his land in which he shall attain reward or war treasure.

There has come to you the great body of the Ummah from your father Ibrahim with your Prophet, namely Muhammad, peace and blessings of Allah be upon him. The Messenger of Allah, peace and blessings of Allah be upon him, said, “During the Night Journey, Ibrahim was shown to me. He said, ‘Muhammad, send my peace greeting to your Ummah and inform them that the Paradise has sweetness of water, pure and wholesome water and they are both of the finest creation. What makes this vegetation grow is Glory be to Allah! Praise be to Allah! There is no god but Allah! Allah is Great!’ “

An-Nasa’ii and At-Tirmidhi both narrate a hadith from Jabir, may Allah be pleased with him, who said that the Prophet, peace and blessings of Allah be upon him, said, “Whoever said, ”Glory be to Allah the Most Grand with all His Praise’, a date palm grows in the Paradise for him.”

Ibn Majah has collected a hadith from the narration of Abu Hurairah, may Allah be pleased with him, that is attributable in which the Prophet, peace and blessings of Allah be upon him, said, “Whoever said, ‘Glory to be Allah! Praise be to Allah! There is no god but Allah! Allah is the Greatest’, has a tree grow. And each time that it said a date palm tree grows in the Paradise.”

At-Tabarani collected a hadith from the narration of Ibn `Abbas that was attributable that was similar and there was another hadith collected by Ibn Abid-Dunya from the narration of Abu Hurairah that is attributable in which the Prophet, peace and blessings of Allah be upon him, said, “Whoever said, ‘Glory be to Allah the Most Grand,’ there is built for him a tower in the Paradise.” It has been said that this hadith is also suspended in form.

It has been narrated from Al-Hasan Al-Basri who said, “The angels act and work for the Children of Adam in the gardens of the Paradise germinating seeds and building. It may be that at one point they refrain and one says, ‘What made you stop?’ They say, ‘Our maintenance has not come.’ ”

Al-Hasan Al-Basri then said, “So there then comes to them what you know-by the ransom of my father and mother for all of your sake -for the deeds.”

One of the early generations said, “It has reached me that the abodes of the Paradise are built by way of Remembrance of Allah. So when the people cease from Remembrance they refrain from building. It is then said to them, ‘What made you stop?’

“They then say, ‘We are waiting until there comes to us the maintenance for the land of the Paradise today. And the righteous deeds are the means by which it is maintained, the castles built, the lands and gardens germinated. It is also how the growth is completed the buildings completed and resolved and changed from outward building sites to ready habitations.’ ”